A Chirp, is the primary vocalization produced by cloth creatures and players in Journey.

The act of producing a Chirp is known as chirping, also called pinging, singing or chiming.

Chirping is one of the few forms of communication between players in the game other than movement or body language.

The Chirp consist of a variety of high-pitch sounds and a visual effect in the form of an expanding light "bubble". It could be described as a sonic bubble.

A Chirp is caused by a players control inputs.

A player caught in a Companion's Chirp bubble will gain a small amount of scarf power, thus being able to fly longer.

Chirping is used to:

If the bubble reaches any type of cloth, it will light up. Banners activate if they receive enough "energy" (through chirps or contact with a Wayfarer).

Specifics should be added below.

Example: When frozen in Snow your Chirp will be faint; when warmed up, it's bigger again.

The sound of the Whales in Paradise (at the pools) sounds like a big Companion Chirp. On PC its clearly audible and sounds like a companion. On PS3 the sound seems to be more gentle / background - the music is louder than the chirp.

Carpets, Whales and Jellyfish also create a sonic bubble, but their sounds are different.

Traveling with a Companion is often a guessing game to understand what they want to express.

Often people use the chirps in the same way, "usage" just means it seems to be a common thing.

Some people chirp a lot, some are rather silent and chirp only when really needed. See Quotes, Silent Sunday.

Press/tap the chirp button for a short time. This does not activate banners, but it will attract flyers within the little sound bubble you make.

Press and hold the chirp button until the Chirp is released. It will make a bigger sound if you hold it the longest, but releasing before will give a big sound too.

Your wayfarer will crouch to the ground, charging the chirp and releasing it when ready.

This creates a huge sound-bubble so you can reach companions, banners and flyers when they are at a distance. Some players use several big chirps to express excitement, maybe about something that they haven't seen before. It's also used to express irritation, such as "I don't want to go there", "What do you want from me?" or "Hey, move, are you AFK (away from keyboard)?".

The big chirp presses you to the ground. Some players like to circle around, while doing a big chirp (dancing).

Press the chirp button fast for two or three times and then hold the button briefly (for half a second or so). This needs some practice to be consistent.

Also used for communication. To show: 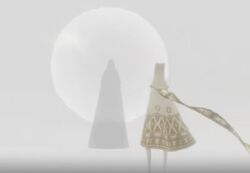 This type of chirp only appears when Wayfarers meet the White-Robed Ancestor. (The actual name is currently unknown.)

After some seconds into the vision, the Ancestor starts to tell a story, with a loud and low-pitched Chirp.

The visions show the past - only the vision in the Tower shows your own journey.

This is quite an important chirp in the game symbolically.

Your and your Companion's symbol[]

You will get a new symbol every time you start a new Journey. It will be one of these symbols in the image on the right.

Using the menu-option Chapter Select will not change your Symbol.

The Symbols that you see on your Companion's chest and when they Chirp is not the same that they see on themselves, and vice versa.

At the end of the Credits the Companions Met Along the Way (CMATW) screen appears and you can match the Symbols with the names.

If you want to find out who your Companion was, try to remember or write down their Symbol and a short note where you met them / description of companion. This makes you able to contact a specific Companion from CMTAW, either to thank them, explain something you wanted to show or invite them to additional Journeys --> How To Play With A Friend.

The Symbols of the players stay the same, during one Journey. When they disconnect, but manage to meet again later on, they will see the same Symbols on their Companion.

Chirping is your friend[]

This doesn't mean you should constantly just chirp - adapt your chirp to the situation, whether just talking, singing, charging scarf or asking "where to go?". See also Quotes.

How and when to use[]

Basically you can chirp all the time, maybe to just express that you are happy. Some Wayfarers only chirp when needed, some chirp all the time and all the shades of grey in between. Experiment to find an amount of chirping you feel comfortable with!

Sometimes quickly and repeatedly chirping is used to

Chirping is mostly helpful, though:

If you are trying to climb vertically or you are diving, chirps will make you drop down and make your task more difficult.

The above is not really an issue at all for normal Journeys, primarily only if you're going for some big jumps or other related goals. Even then, it is not really a problem, but consider that you might not always need to chirp. Try to find out what works for you and your Companion. If trying a jump doesn't work with chirping, try less or no chirping for that jump.

What to add here:

The Chirp sound sometimes vanishes in the Pink Desert level near the tower with the Symbol or along that west-east line.

This normally occurs for both players at the same time. The bubble still appears, but the sound is missing. Some Chirps may still have sound, but normal chirps do not resume until the next level.

Its not (yet) reported on PS3 and seems to happen more often on PC.