New Dark Theme available! Try it out now by clicking the moon symbol at the top right corner.

Edit
'This is an "Expert Mode" article or section. To avoid frustration or confusion, we recommend reading the Expert-Main-Articles first, those can be found on the main article.'

Not to be confused with Infinite Flight on PS4 or on PC.

Infinite Boost is a variation of the Dive Boost where you fall at an extra-shallow angle and a super-slow speed for a few seconds. If done correctly, it allows you to gain height without using your scarf, after boosting.

How to do an Infinite Boost[]

A pinnacle of flying difficulty. (Somewhat easier in Paradise, because of the sort of low gravity there.)

Can't be performed without a controller ! (stick sensitivity required)

This boost is sometimes called Ainshent Boost, after the user TheAinshentMariner, who helped make it more popular. However, sometimes people might differentiate the Infinite Boost and the Ainshent Boost, with the latter being a variation that includes scarf usage (= an optimal slow boost).

It's recommended to learn Slow Boost and Level Boost first, and to perform them well before attempting to learn the Infinite Boost ; IB being a perfect mix of precision between both.

Legend says Sir Isaac Newton lost all his hairs upon playing Journey and discovering how Infinite Boosting escaped the law of gravitation and Earth's physics...

The concept behind infinite boosting is to lose as little altitude as possible during the dive, by falling as slowly as you possibly can, and building up enough boost power to regain the altitude lost, plus a little bit more !

For this, what matters most is the ratio altitude lost versus time spent on diving:

The graphs below show the results nathanj got out of every successful dives from an infinite boost session, in order to study the optimal diving duration. This was performed with tools to precisely monitor the altitude gained over time, and also a visualiser to adjust the camera angle as precisely as possible as the dives went, for more relevant results. The video shows the best results from this IB session.

For any other aerial Fancy Flying technique than IB, we would jump regularly to slow down the falling speed, but with IB it isn't needed anymore with enough precision ! By repeating it over and over it is possible to reach unlimited height (as much as your hands can handle at least: give them a rest sometimes !)

Give IB a try in Paradise first since it allows for a rather big margin of imprecision on both sticks. It doesn't take very long to get out of the skybox there for example, with the stronger boosts this level gives and a bit of training ! (It maybe takes about 2h of infinite boosting performed to near perfection in regular levels to start getting out of it...)

This video demonstrates how to perform the Infinite Boost efficiently, with a controller shown and a boost power visualiser for a better understanding of camera angles effect ! (inverted camera stick axis on the video)

The goal would be to never make the magenta bar reach the blue one and boost before that happens, or adjust the camera angle more to the ground a little. You cannot normally see these hidden boost power stats in-game, which is why it takes lots of practice to predict them the best you can while playing through trial and error.

Observe how a steeper camera angle during most of the dive can still bring a very correct result in terms of height gain at about 1:25 in the video (skipping step 5 from the "instructions" above).

The following video shows 2 Ainshent boosts. Observe how they adjust the camera angle progressively during the first dive to make sure to keep on charging up more boost. This wasn't needed for the second dive since the camera angle was more vertical to begin with.

Video by TheAinshentMariner on PS4? or PS3. Length: 1:05 minutes.

Note it seems they do press the left stick a little more forward the moment they jump everytime (we can hear more wind noise), which isn't needed and can make one lose altitude faster instead.

This tutorial by aravshetikolava gives nice advices and a practice exercise to see how well you perform starting from a ledge !

Here is a clip of Apno in PD. After more than 1h of infinite boosting. He went even higher than that later... (notice the skypainting effect due to being outside the skybox on PS4) 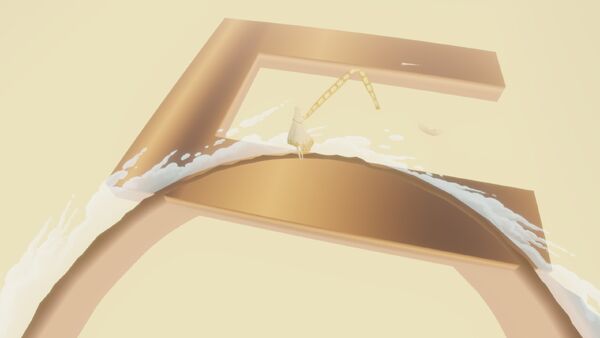 Infinite boosting can be very useful as a reddie when you can't recharge your scarf, if you want to move faster/higher. This technique is extremely useful for red robe glitched speedrunners who tend to master it.

Need even more height and faster? Have a look at Low Frame Glitch warps ! (PS4 and PC only glitch, less random on pc).

Fancy Flying is when you control the character and camera together in order to gather energy with a dive and release it in the form of a boost, to gain lots of height, distance and/or speed.
Refer to the main article for general information and tips.

Fancy Flying is when you control the character and camera together in order to gather energy with a dive and release it in the form of a boost, to gain lots of height, distance and/or speed.
Refer to the main article for general information and tips.