Edit
watch 01:36
We're Getting Mutants in the MCU - The Loop
Do you like this video?
Play Sound
Navigation help for Level-articles: Levels

Remember that by reading further then the Overview you might get exposed to spoilers! The Wiki intends to describe every little detail and background knowledge (as soon as available and verified).

Detailed help for Trophies, Glyphs and Symbols are given under that headline. In the Sections part, there will be just hints.

Pink Desert is the level were you are confronted with a huge area of sand, meet the first creature, Shooting Stars over your head.

Compared to other levels, this one is rather wide than long. Carpets and Shooting Stars will be introduced in this level.

Things to do: either head directly to the mountain, while missing some collectibles or wander around through the desert.

Companions are often eager to show players around here, flying from one important place to the other. There is no straight route to visit them all.

For this level the Trophies, Glyphs and Symbols are mentioned in sections, since there are many different ways you can get to them.

After one last big dune you will see a rather dark looking area (flying sand and shadow) with two connected Towers and a huge wall to the North. On the last tower you will find the Shrine, that opens the path to the next level.

When the player enters this zone they are treated to sweeping views of desolate sand dunes before control of their character is returned to them. Beyond the first dune is an inactive shell of a machine, from which a cloth creature may be freed.

Scattered throughout the sand are several more ruins. There are parts of machines laying around and banners growing out of them. When activated, a or more carpets will be released from the inside of the machine part. Shooting stars will cross the sky from time to time.

A route through the desert[]

The map on the right should help to find the basic directions to get the Glyphs, Symbols, Carpets (cloth) and the flower.

Again, in Journey there are often several different paths you can take. Some are shorter, some lead to certain places and others are used to mix things up.

Tandem Flying, flying together with a Companion while chirping and touching each other works very well in this level and helps a lot to be quicker. Each ones Chirp bubble needs to reach the other player to charge their scarf, to help with flying.

Note: this is not exactly the route shown on the map.

("I could not find another (shorter) way to deliver a text description on how to go. Finding all cloth and symbols may take some extended walking around, but it helps to get to know the level better too. Apologies for the long read! Ravingmadness (talk) 16:43, 2 June 2020 (UTC)

Towers at the end[]

After the big dune you see some buildings in the distance. The whole area seems to lay in shadow (from the big wall at the end?) and dust. Like a whirled sand is circulating around those Towers.

Two of many ways to get up the towers:

At the small tower, after the broken part of the ramp you will see Carpets trapped behind bars, "Cloth 6". Chirp at them to free them, then they will pick you up to the top of the small tower.

A bridge leads to the bigger tower. Many people like to skip the walk around the tower here and jump directly to the left side, where the carpet picks you up to the platform.

The bridge leads directly to a window where one can see moving parts in the tower. An eye will light up (first scary part in the game), loud "machine working sounds" and sounds from the exaust below can be heard. While walking around the tower, you get to see that the other part of the tower is filled with carpets.

If you jump or fall down to the bottom the carpets will lift you up to the top again. Just need to find the one that is willing! There are certain places where pick-up carpets are waiting for you. Example: right below where the last carpet picks you up to the big platform.

On the big platform the player gets to see the trapped Carpets from above, but no chance to free them. "Symbol 4": Looking towards the statue, walking on the left side ledge to the end of it.

At the end of the vision you get to see that the gates on the platform open and free the last carpets in this level from both towers.

Depending on if you are with a Companion, one or two Carpets will wait at the platform to pick you up and bring you over the wall to the next level.

There is a certain point, that is known to cause disconnects: To connect or to disconnect! Pink Desert. 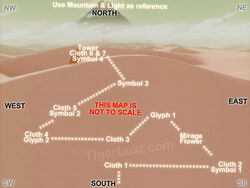 Often carpets to free for the Trophy are at the same place as a Symbol or Glyph. A good way to pick and find everything is to follow the route shown in the map. Since its hard to describe a way to every single Symbol or cloth, a route for to reach all Trophies, Glyphs and Symbols is given in Sections.

Two Trophies can be achieved:

Two Glyphs can be found in this level, see images to the left and Sections.

Four Symbols in this level.

As mentioned above, detailed description about a possible route to get them is found in Sections.

Actually falls as star from the sky. If the timing is right, you might walk by the ruin and symbol is not there yet.

In the gallery below, you can see that its possible to place yourself on top of the ruin before the star dropped. Figure the flying route and place yourself at other places on the ruin and catch the star before it reaches its final destination. See Galleries below.

It can also be reached by flying from a bridge to the side directly up to the tower.

PC versions, after chirping or touching the Flower quickly several times, you will hear a melody that even plays when going away from the Flower.[3]

After watching the vision:

About the flower and naming the main character: