Triggers in video games, activate scripted sequences; pre-defined series of events that occur when triggered by player location or actions that play out in the games engine.

Some scripted sequences are used to play short cut-scenes that the player has little control of.[1]

A certain place or thing that a Wayfarer can hit / activate / walk through, that makes the game react.

For newcomers: an introduction to triggers. Learning where and why things change in the game, can be

For long-term players: a growing list of "well known triggers", which are (ab)used by Expert Mode players. Through playing around with triggers, you can change things, compared to normal gameplay.

The range of tricks, also called Glitches on this Wiki, is wide. From getting to know, where you start dying and don't need to walk anymore, the famous War Machine Capture, to glitches that are known to exist, but specifics unknown.

Triggers have many parameters that define their behavior; perhaps the most important distinction is between these types:

How is it triggered?[]

The sound that you can create.

If the visible bubble reaches for example: a Banner, the 4 stones to the side of an Ancient Glyph or a certain Carpet in Pink Desert... the trigger is "hit" / activated.

Banners, the stones at the Glyphs and some other things can be activated by touching them, as well.

In many cases "the thing" and a certain sound is triggered.

Glowing cloth is also activated through touch. Its active only as long as the touch lasts.

Triggers are usually invisible boxes or planes or other geometrical figures placed inside a level. Think of them as a certain point or area, a line that you have to cross etc.

The activation of those triggers can only be recognised through observing the triggered change in the game.

Example image shows the shooting star falling. It is triggered by entering a certain area. You could be in a valley and not looking up, thus not recognising the activation; though you can hear the sound of the falling stars.

Triggers may activate when you enter a marked area (most useful triggers are of this kind) or when you exit it (a good example of this is History Lesson statue and lights turning off).

Some events are triggered as part of a timeline sequence at a predetermined moment (WM ambush sequence in Underground is a good example). Some triggers activate after a delay ("Event After Delay"), or at random ("Fire At Random").

Rarely both timed and manual activations are included. The best example is launching through the vortex at the beginning of the Paradise level: the sequence can be initiated by the player, or by the timeline (if the player won't do anything, the game will shoot them into the vortex automatically).

Basically everything is triggered somehow, looking from a programming point of view.

Here are some obvious triggers:

Activating this trigger forces the game to load a different (the next) level. The trigger is normally in a corridor between levels (not all have a corridor).

The game saves into a file at several points. The main saving points are between levels and at the credits.

This means, if you quit a level and restart the game, you will start at the beginning of that level. Tough Paradise is an exception and quitting in this level, makes you start in the Snow (PC versions give you the option to restart Paradise).

The game of course keeps track of things that happen within a level from start to end. Example: how many Carpets were freed in Pink Desert.

Some things might be stored, even when "chapter selecting" or using the quit to title (PC versions only). [2]

The vision at the end of levels is triggered upon stepping into the light circle (after activating the stones around the statue).

Cutscenes like the Whale in the Tower level, leaving its room and camera zooms. Often cutscenes take away the players control over the Wayfarer or camera, for some seconds.

Many areas have "camera hint" triggers which adjust camera position, rotation, scale, or field of view.

Non-playable characters such as cloth creatures change their behavior. A Carpet may fly away from you or tries to hug you, a War Machine comes to life or a Jellyfish is purring.

Upon hitting certain triggers, music and sound effects may be turned on or off. Most music triggers are one-off triggers arranged so that in a normal play-through the score develops with each trigger. Activating these out of order can lead to overlapping melodies (commonly abused in Underground and Paradise).

In the Snow level strong wind appears when the player get inside specific areas like Death March plateau or whistling stones valley.

In Sunken City, Paradise and Underground there are instances of forced sliding. See also Surfing, Slides and Drops.

If the player goes into a specific area their Wayfarer will be affected by freezing or will warm up.

The list is probably not complete, but gives an overview about things that causes changes in the game; like music, camera etc.

In the trigger-list below, not every cutscene or forced camera movement will be mentioned. The list should focus on "usable" triggers.

If the list is getting long for a level, should be sorted south-north.

Camera and music trigger. Activated by going to a specific area.

The trigger "line"/area is not only on this hill. You can experiment to get screenshots, where the title card shows up at a different place.

NPC and music trigger. Activated by going to a specific area (these are actually two separate triggers close together, so it's possible to trigger music but not Nick). 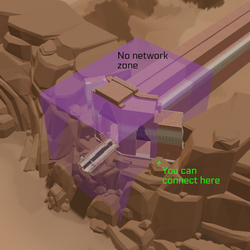 Special kind of trigger that starts multiplayer. Activated by jumping down from the first platform. This is called SuppressAutoLobby.

Technically this trigger does the opposite: it prevents connections whilst the player is inside a certain area. The cube doesn't span the entire top area though, and it's possible to connect while sitting on the rock on the far left (west) side of the top platform as shown on the image.

Note: you need to exit the trigger area to regain matchmaking, it extends to the entrance bridge.

Camera trigger. Activated by going into the cave, camera is slightly movable, but kind of stuck as long as you are in the cave.

The stuck camera is used for the Cave Boost.

This one makes the use of the Headbonkers Cave entrance to OOB a bit complicated. After entering and trying to go up, the camera shows the Glyph and you can not see yourself. 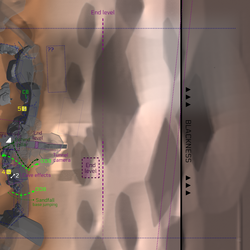 At the North side of this OOB are several level transition triggers.

This cutout from the level map shows level transition triggers. There are three trigger objects but they are partially below terrain, so only certain parts are usable (this is marked clearly on the latest version of the map).

Just to mention it: The disconnect at "around the small tower" is probably related to old tapestry triggers or maybe one of the player did activate one, while the other did not. Shooting star symbol falling? Factory music?

Fall down into the pit[]

The "dramatic falling music" can be also triggered at the place shown in the image. Further navigation help should be added.

Triggers in this level are important for War Machine Glitches.

Most WM glitches are related to the OOB in this level because out-of-order activation of triggers is what makes most glitches work.

The following triggers have been identified and can be found on the map (listed in order of appearance south to north, or left to right on the map). All triggers are one-off triggers unless described otherwise.

Skipping some Glyphs is used for several Glitches, for example Sideways Whale.

In this level, there are also some War Machine Glitches possible, quite some still unknown.

There are no actionable triggers in the Credits levels, only a few ambience, shader control, and particle effect triggers activated depending on camera position.

In game a player might only recognise the direct outcome, but eventually music, flyers and other environment elements may have changed too, all with this "one" trigger.

Triggers (especially music triggers) may work differently on the PC versions, maybe even between PS3 and PS4.[3]

Music is essential to Journey and is carefully integrated with its gameplay. As explained in the Developer Commentary video, having a Companion nearby adds new instruments to the active theme, most notably harp.

Browse Categories (bottom of articles) to find more related articles. Below you find the category-tree of Expert Mode.

Browse Categories (bottom of articles) to find more related articles. Below you find the category-tree of Expert Mode.