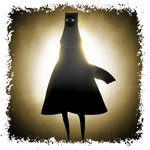 Wayfarers are the creatures that travel through the world of Journey towards the ultimate goal, the Mountain.

The character you control in Journey is a Wayfarer. Companions you meet along the way or travel with are also Wayfarers. Wayfarers are known by a variety of names, the most common ones being:

When using the chirp button, one can see their Symbol, and it is also visible on the Wayfarer's chest (when glowing).

The Symbol that your Companion sees is different than the one you see when you Chirp and vice versa.

Wayfarers (your character included) may wear a white or red robe with different embroideries (tiers) indicating the player's progress in the game as explained in the following sections.

You start the game as a Red Robe (RR) with just a single yellow line on the bottom of your robe. This makes you a first run and people that understand how the pattern increases will recognise you as a newcomer. With every completed Journey you will get more embroidery on your robe, up to your "fourth run"/Tier 4.

The terms "run" and "tier" are both used and understood by the Journey community members.

A Wayfarer playing the game for the first time. They cannot meet a White Robe.

In this version of the game it's possible to meet a first-run as White Robe.[1]

With every completed Journey, the embroidery will increase when starting a new Journey, until it reaches full embroidery (Tier 4).

You might start a Journey through Chapter Select (CS), finish it and will have an increased pattern at the start of your next Journey.

It is said that if you start at Snow and then finish it will not count as a full Journey (maybe Tower is needed or even further back to get the Trophies Rebirth and Companion).

A fully embroidered robe, also known as a Full Tier or Full Run, distinguishes Wayfarers who went through Journey three or more times (Tier 1 Robe is available with zero runs, and each run adds a tier until maximum is reached).

The terms "cloak" and "robe" are used and understood by the Journey community members, and they mean the same thing.

Red Robe (also known as Red Cloak) is the default color that all Wayfarers wear. With Red Robe, scarf power can be recharged using cloth creatures or Companions, but won't regenerate when simply walking on the ground. Thus, a Red Robe's movement is more limited compared to the White Robe (see next section).

A Wayfarer who has found all the Symbols gains access to the White Robe. Note that your robe would not automatically switch colors when you pick up the last Symbol, you would need to obtain it at the Wardrobe in Chapter Select during your next Journey.

New Journeys normally start in red and the player needs to switch to white at the Wardrobe. See Wayfarers#Trivia.

A White Robe Journeyer would usually have a fully embroidered Robe, but it is possible to get a White Robe with lower tiers if you manage to collect all the Symbols within only one or two Journeys.

White Robes with low Tier could also be an experienced player who reset their game. See Companions.

The table below lists common abbreviations to identify different tiers of Wayfarers.